What’s this election about?

Ballots have arrived! As the election gets closer, the pressures (and the attacks!) ramp up significantly.

If you haven’t seen the ads, my opponents are hitting me for being pro-life – ignoring their indefensible policies on everything else. Think about it – the economy is in shambles, serious crime is up, the border is in crisis, students are behind, and parents are unhappy – all thanks to their policies. But I find the hit ironic. As I told a wonderful group of Catholic voters at the recent Catholics for Catholics event, I feel like they’re inadvertently promoting me! It was my heart for women and the preborn that led me into this arena to begin with, but I can’t take credit for Arizona’s abortion ban. That was the work of lawmakers before my time, including those who re-voted their commitment to Arizona’s ban in 1977 after the Roe v. Wade decision, assuming the states’ right to determine abortion policy would be restored at some point. Since Roe, states like Arizona have worked to protect innocent preborn lives and their mothers within the high court’s parameters, which allowed abortion up to the moment of birth.

This is what our opponents continue to stand for, and their voting records show they’ve opposed every single limitation and protection over the years. Those who support abortion to the moment of birth and vote to withhold care from infants who’ve survived an abortion don’t have much of a leg to stand on (ICYM – check out my op-ed “Common Ground on Life”). This isn’t where voters are and it is becoming harder to ignore the impact of our nation’s undermining the sanctity of life on ALL life – not to mention the rampant sexual promiscuity, infertility, and gender confusion.

When we replace our Creator as the Giver of Life with government deciding who is worthy of life, we see it play out in our care for every other vulnerable life in society – care for the elderly, those with disabilities and mental illness – and how we treat victims of crime and not holding their perpetrators accountable.

However, in this election, voters are conflicted on the issue and may be making this their voting issue. Many who have been affected by abortion don’t recognize its role in the societal harms in our post-Judeo-Christian culture, so it’s just the beginning of making the case for a more pro-life America.

But let me encourage you. In the landscape we have, know I will never stop standing for the greatest protections possible in law and for the dignity of every human life – and neither should you. It’s in speaking up for those with no voice that we show who we really are.

It was a German pastor, Martin Niemoller, who penned these famous words in the midst of Hitler’s atrocities.

When you’re talking with friends and family, remind them that this election, there really are only two choices: Candidates who will defend innocent life and offer women and families the support they need to bring a child into the world and candidates who will set absolutely no limits on abortion, allowing it to the moment of birth. Let that sink in.

Record versus record. There are lots of issues at stake in November! And I firmly believe voters should compare candidate’s records and let that be their guide. I’ve made mine and my opponent’s records very accessible and shareable! Check out NancyBarto.com/Record and DraintheMarsh.org. 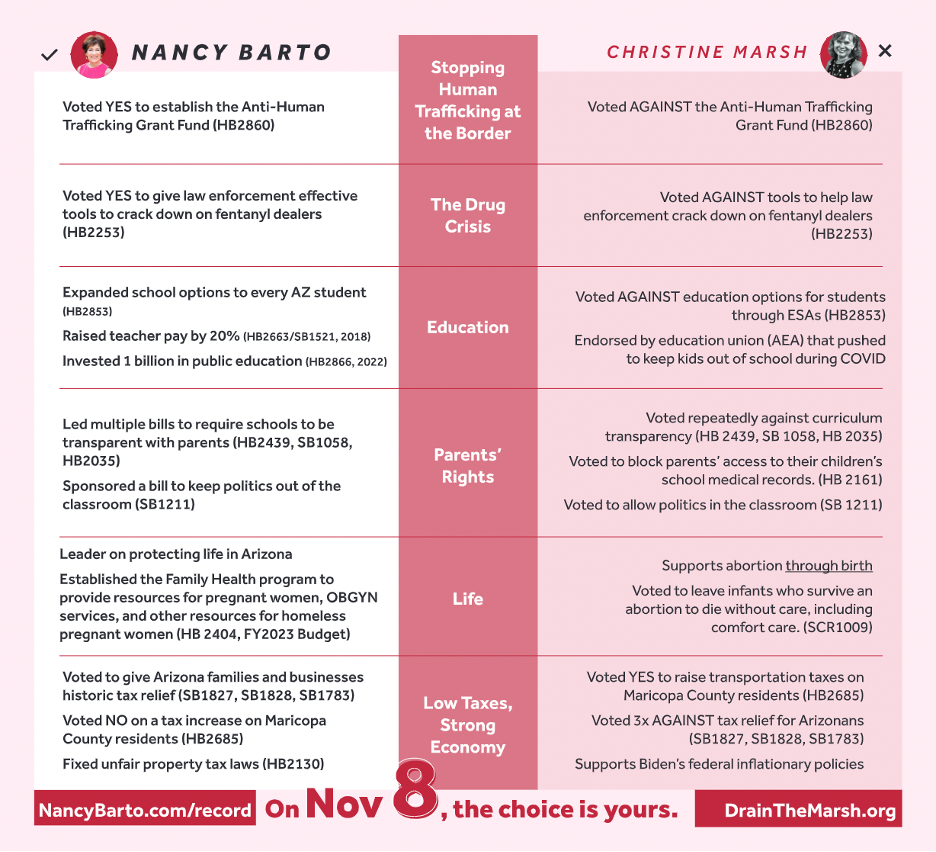 My new Action Center! Find out everything you need to know. 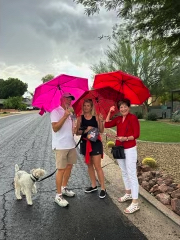 We’re walking, rain or shine! Yesterday, I was happy to be joined by my brother Greg, his wife Jen, and their dog Diego.

Your engagement matters and it has already made a MASSIVE difference. Joe and I thank you for your support from the bottom of our hearts. I believe we’re going to see a good outcome on November 8.