This week, President Biden gave a speech in which he doubled down on the Left’s agenda to stop dissent – especially by those MAGA types who stand for free speech, real control of the border, and protection for our children – and against inflationary spending and the targeting of American citizens by the IRS and other federal agents. Such a danger! The reactions from the right and the left couldn’t be more different.

But beyond the rhetoric, this speech highlights key battle lines going into November, stark differences between candidates that go beyond labels of “MAGA” and “progressive.”

Biden is demonizing you if you believe that…

…an open border is a threat to our security and has allowed deadly fentanyl to pour into our communities and put our kids at risk.
…children belong with parents and families and that government doesn’t know best.
…our military should be known for its strength, not its wokeness.
…energy independence is key to a thriving economy, good jobs, and stability during international conflict.
…our kids deserve the education option that’s best for them, whether that’s a public, charter, private, online, or homeschool.
…regardless of whether you’re pro-life or pro-choice, allowing abortion until the moment of birth – and even after birth – is barbaric.
…police play a vital role in keeping our communities safe and we can’t expect to reduce crime if we continue to undermine law enforcement.

These are the issues that separate myself and my opponent Christine Marsh. To back up my own claims, I just released my updated Record Page where you can see what I’ve stood for – check it out here. Stay tuned for a platform exposing my opponent’s radical anti-police, anti-parent, high-tax, abortion-extremist record that is out-of-step with our district.

What’s really at stake? California advanced legislation this week to ban all gas-powered vehicle sales by 2035. At the same time, amid black and brownouts caused by their current poor energy infrastructure weakened by green policy, Californians were told not to charge their electric cars. This is just one example of the madness we can expect here in Arizona if we don’t vote Republican across the board this November.

LD4’s Golden Ticket is settled! Golden tickets help guide voters looking for who to back when they vote. The LD4 Precinct Committeemen heard from the candidates and voted to approve the contested Golden Ticket candidates on Wednesday night. They voted overwhelmingly to support conservatives Amy Carney and Carine Werner for Scottsdale Unified Governing Board and Sandra Christiansen and Eddy Jackson for PVUSD (Lisa Farr, running together with Sandra and Eddy, was automatically included on the Golden T for the 2-year term). Finally, the PCs selected Jason Lundgren, Amanda Monize, Barbara Seago, and Donovan Neese for the important CAP water conservation board. They also recommended for/against the upcoming ballot propositions. Great job, Chairman Dan Farley. Our next monthly meeting is September 14. Join us and learn how you can get involved in the new District 4!

Coming right up!  Join me – and our next Governor, Kari Lake! The race ahead of me is going to be a challenge and I continue to need your support. Spread the word! I’m excited to announce this event as a great way to support my campaign and hear from conservative champion (and, I pray, future Governor!) Kari Lake! Join us Monday, September 12, 2022, at 6 PM in Paradise Valley. Minimum individual contribution: $250. Details below! 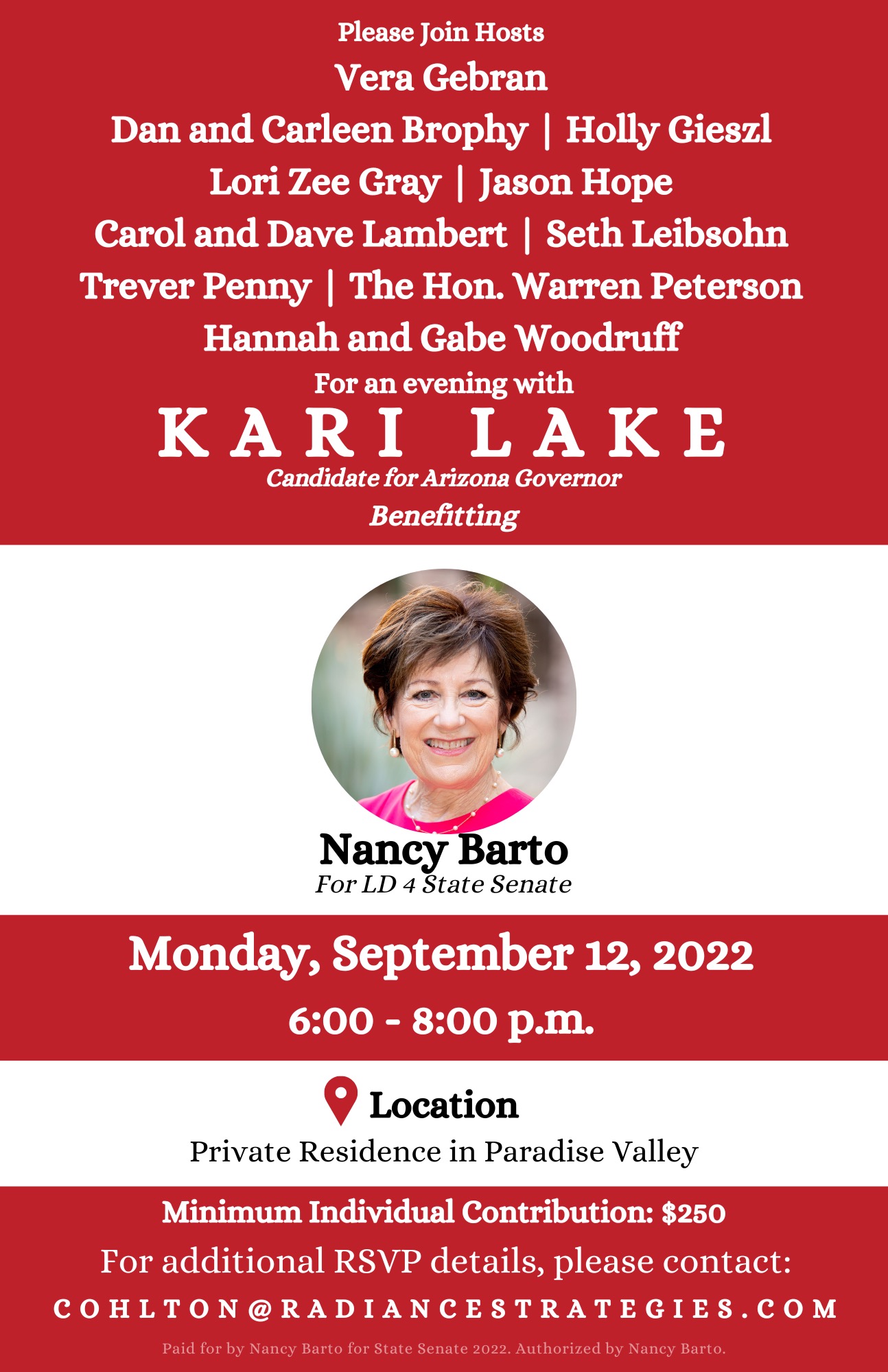 Can’t attend? Donate or volunteer to get me across the line!

Thank you for fighting for our community, our families, our most vulnerable, and our precious values.