For decades, the Left has used language to deceive, confuse, and mask the truth. Follow any Leftist movement that had a measure of success and you’ll likely find words weaponized to achieve the goal. For starters, just look at their redefinition of the word “woman…”

The Left renames Curriculum Transparency. This week, I read an article from an online publication aptly named “Reframing America.” In, it the author takes aim at parental rights and curriculum transparency, saying, “The term “curriculum transparency” is already starting to take hold. We have to stop it in its tracks by never, ever using that term, and by replacing it with “teacher surveillance.” As a Senator, I’ve run quite a few bills on this topic (e.g.: SB 1211, HB 2495, HB 2439) and I can assure you that “curriculum transparency” is the accurate term to describe parents simply knowing what their children are being exposed to in the classroom day in and day out… But woke indoctrinators find it threatening to their agenda. Look for this phrase to begin trickling into articles and news stories unquestioned in the coming months.

What is a recession? Faced with two quarters of negative growth (the textbook definition of recession), the White House and its allies in the media went into overdrive redefining the term recession. Then, Biden named his tax-and-spend bill the “Inflation Reduction Act” despite the fact that experts predict it won’t.

“Forced birth” goes mainstream. Post-Roe, this the pro-abortion crowd’s favorite new phrase to describe the pro-life position. You’ve may have already started seeing it pop up in articles or social media discussion. It has its roots in Margaret Atwoods “Handmaid’s Tale” (that my opponent thinks is “classic” literature that students should be reading). For an insightful take, read “The ‘Forced Birth’ Falsehood” by Alexandra Desanctis on National Review. ‘Forced birth’ is actually an attempt to cover their support for what Roe actually allowed – abortion up to the point of birth and partial-birth abortion with no limits or protections for the preborn and women. The left doesn’t want you to know what abortion is or that there are abortion survivors (another phrase they don’t like) that are glad to be alive. Former abortionists get it. Watch the powerful and heartbreaking testimony of former abortionist turned pro-life-advocate, Dr. Anthony Levatino.

Pedophiles – just part of who they are. The Libs of Tik Tok that gained traction for shining light on the dangerous rhetoric and behavior of radical Leftists recently posted a video of a “Licensed counselor and sex therapist [that] advocates for “MAPs” (minor attracted persons). She says they are “vilified” and “marginalized” and shouldn’t be referred to as pedophiles.” This is no doubt promoted in our halls of academia already.

Genitalia mutilation dubbed “gender reassignment.” You have probably heard the phrase “gender reassignment” a lot lately. It’s a dishonest term for the mutilation of our children that is happening in our own backyard. Phoenix Children’s Hospital has a “Gender Support Program” where they are “committed to excellent gender-affirming clinical care for youth…” They are more than happy to “suppress puberty” and do “gender affirming hormone therapy.” Our recently passed law banning gender surgery for minors has loopholes due to our weak majority, doesn’t ban referrals for minors’ surgeries, and doesn’t go into effect until April. The science is with us on the harm to minors, with the world’s largest gender clinic in the U.K. recently being forced to shut down over practices not supported by science.

Media duplicitousness on full display. Liberal author Sam Harris said the quiet part out loud this week, admitting on a podcast that he stands by burying and censoring the Hunter Biden laptop story before the 2020 election, going on to make this statement: “Hunter Biden literally could have had the corpses of children in his basement – I would not have cared.” When the media shows us who they are, let’s believe them. Now, they’re telling us with their own words.

Ending on a positive note!

Arizona is the gold standard for educational freedom! It took many years of perseverance, but I was proud to be part of this historic achievement for Arizona families and students! Every K-12 student in Arizona who attends ANY Arizona school is now qualified for a starting scholarship of $7000 to the school or educational setting of their choice. Applications are open (azed.gov/esa/) but applications for those qualifying under the new law will be held until the law goes into effect on September 24. In addition to adding a billion in new funding for public education and strengthening transparency and parents’ rights, this has been a historic session for improving education in our state. 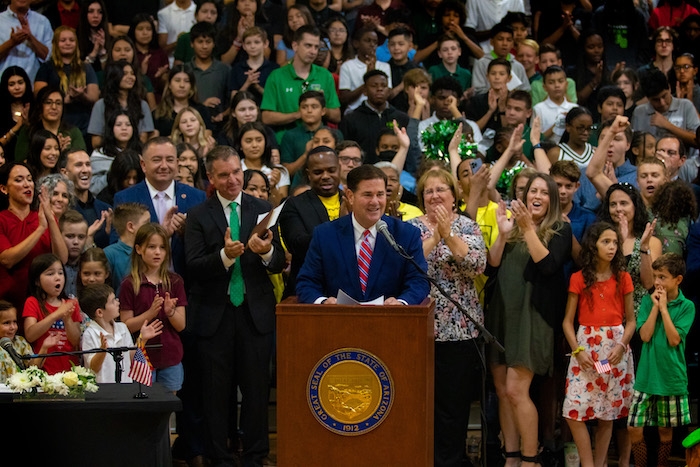 I need your help more than ever in my General Election race! My opponent embodies the radical ideas I’ve talked about above and we must bring this to light. Your support financially or as a volunteer helps us spread that message. Watch for upcoming events you can support and invite friends to (mark your calendar for a Meet & Greet on September 8th – more details to come!). Thank you in advance for your partnership.