Zero? The White House is messaging on overdrive that inflation grew by 0% last month. Newsflash – it’s still at 40-year records of 8.5%. This deceptive messaging is just another way of saying it has stayed there. A disaster not getting any better is hardly something to celebrate. But I digress…

They’re again attempting to change the definition of words, digging themselves deeper by making one false claim after another. How stupid do they think America is? The Biden bill purported to deal with inflation does exactly what handed us inflation in the first place – tax and spend!

Heard it won’t increase taxes on those making under 400k? Think again. Fox News reported that “according to the nonpartisan Joint Committee on Taxation (JCT), Bernstein’s pledge is not true. According to the JCT, Americans making less than $10,000 per year would see a 0.3% tax hike starting in 2023. Overall, starting in 2023, taxes would increase by $16.7 billion for Americans earning less than $200,000.”

I found this breakdown and great visuals on Biden’s bill from Stephen Moore at the Committee to Unleash Prosperity. I’m quoting some useful tidbits below:

The House Will Vote To Increase Spending, Debt, Taxes, and Inflation On Friday. The bill costs some $750 billion. This is on top of the $3 trillion that Biden has already spent. The chart below puts the Biden spending spree in a historical context. Adjusted for inflation the Biden spending blowout has been larger than the cost of the Louisiana Purchase, the Erie and Panama Canals, the intercontinental railroad, the interstate highway system, the eradication of polio and smallpox, the GI Bill of Rights, the Marshall Plan, the Moon Landing, and the Human Genome Project. And next week the Dems will bring up a $300 billion veterans benefits bill that is completely unpaid for.

Biden is reminding us of the Jim Carey character in the movie The Mask: “Somebody stop me!” 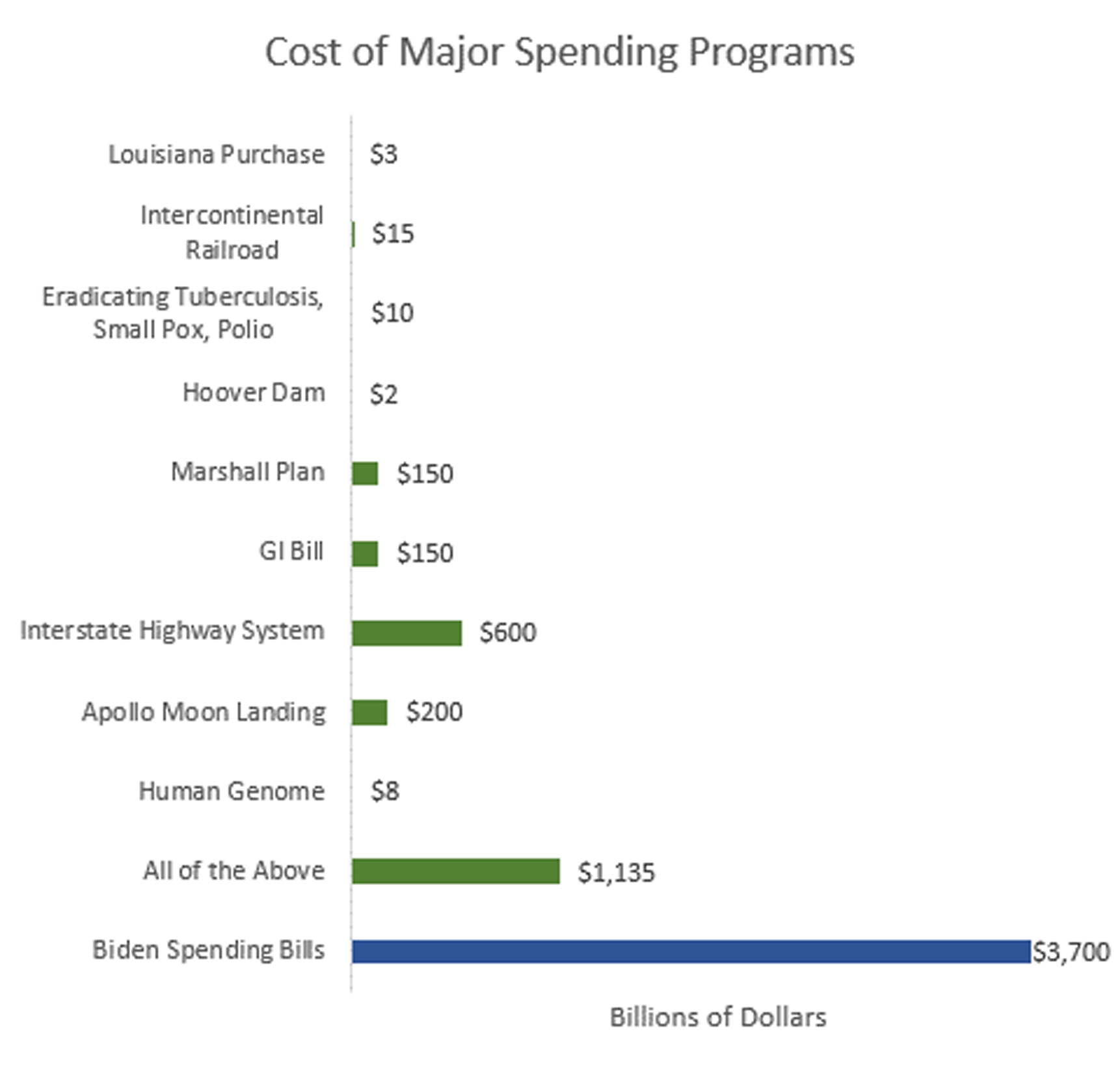 Biden-flation Still Crushing The Middle Class. As we predicted on these pages, inflation is subsiding – as yesterday’s report on consumer prices shows.   But a major reason for the slowdown in the CPI in July was that consumer demand is falling because a) the economy is slowing down and b) Americans can’t afford to buy things at the current high prices. It’s comical to watch Biden take a victory lap over 8.5% consumer inflation, 10% producer inflation, and $4.29 a gallon of gasoline. The still inescapable truth is that low-income and working-class American families are still being crushed by Biden-flation. Here’s how much everyday staples have increased in just the last year: 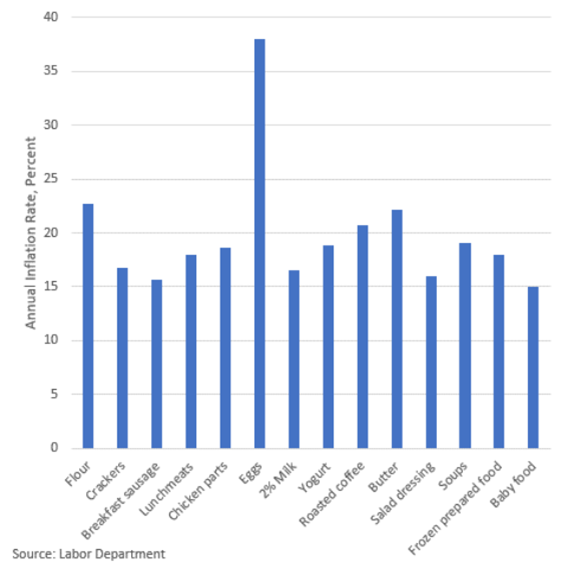 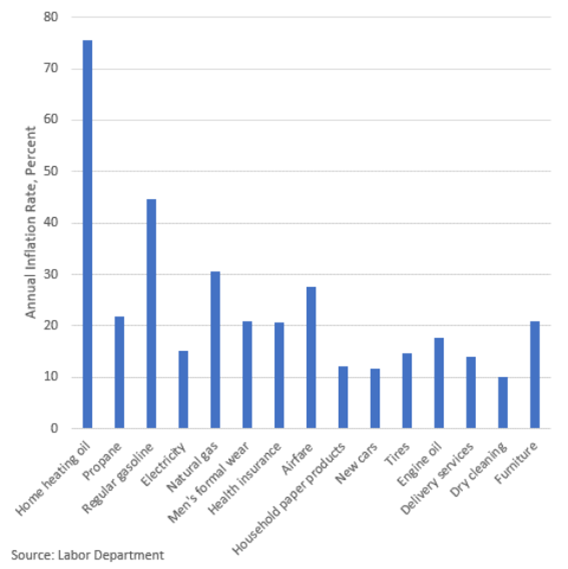 The federal government will be sic’ing the IRS on more Americans – to the tune of 87,000 NEW agents. If Biden’s new tax-and-spend plan wasn’t already dangerous, the legislation will add a shocking number of new agents. To put it in context, enough to fill a large stadium, as one commentator pointed out. More Americans will be unfairly harassed and audited if this passes. A job description (recently removed) for new IRS agents included a requirement to be armed and “willing to use deadly force.” The government overreach just keeps getting more dangerous.

Pediatricians voice anger at forced transgender policy. What happens when the private sector and professional organizations start acting as arms of the government to silence dissent? Our kids suffer! Internal files leaked from the American Academy of Pediatrics show pediatricians striking back at the AAP’s policy for “affirmation” of gender change for children. These courageous professionals call on their association to revisit the policy – and then are silenced by AAP’s policy changes aimed at shutting down discussion.

But there is good news…

Right to Try 2.0 signed into law! Arizonans suffering from life-threatening conditions will no longer have treatment limited by government regulations. Read my full statement in this release from the Governor’s office. Personalized medicine is the future. Our state led on the first ‘Right to Try’ and this is step two in getting bureaucracy out of the way and saving lives. The long FDA approval process often puts potentially lifesaving treatments years out of reach for the terminally ill. This bill gives those patients the “right to try” these treatments before it’s too late. There are real human stories involved. 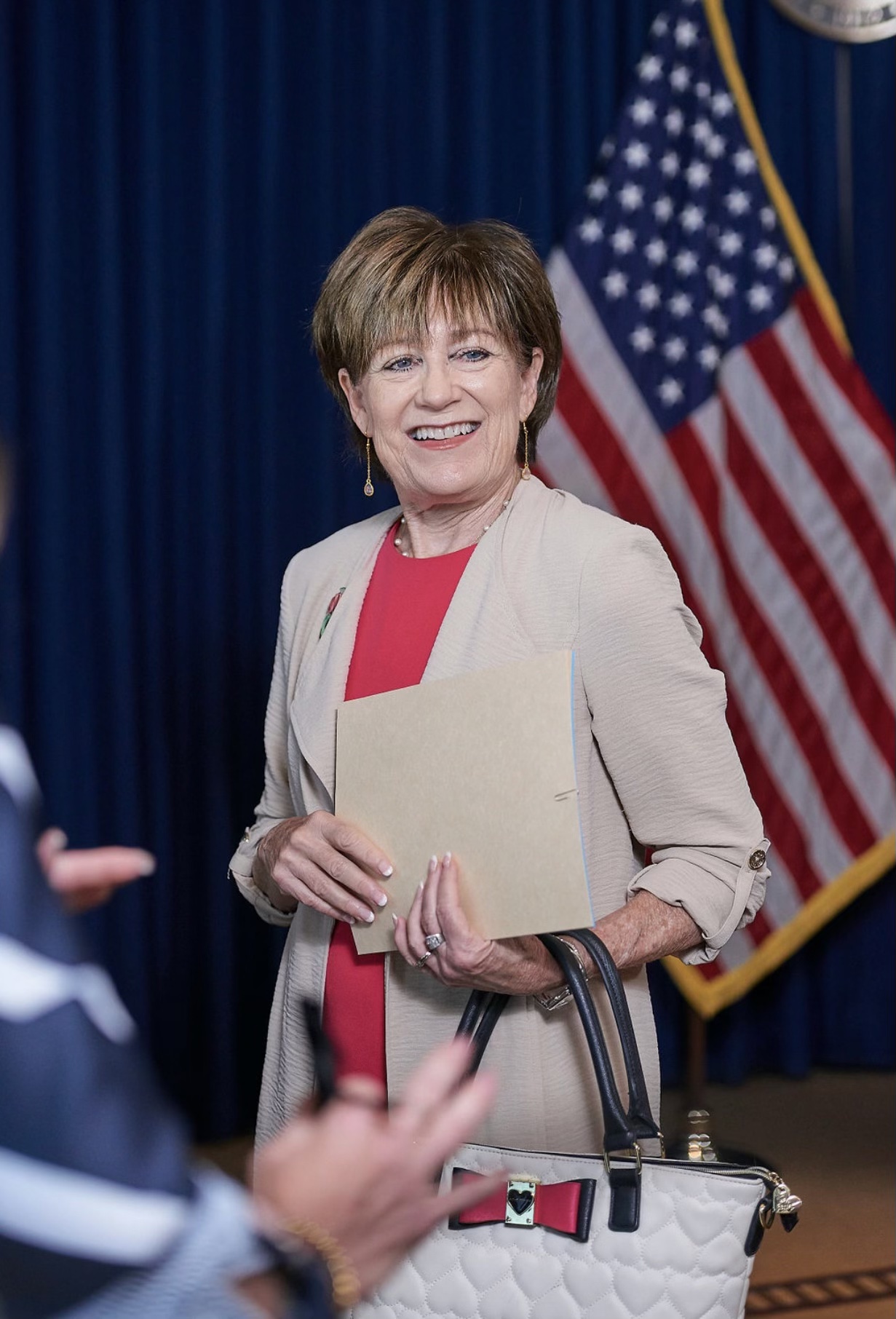 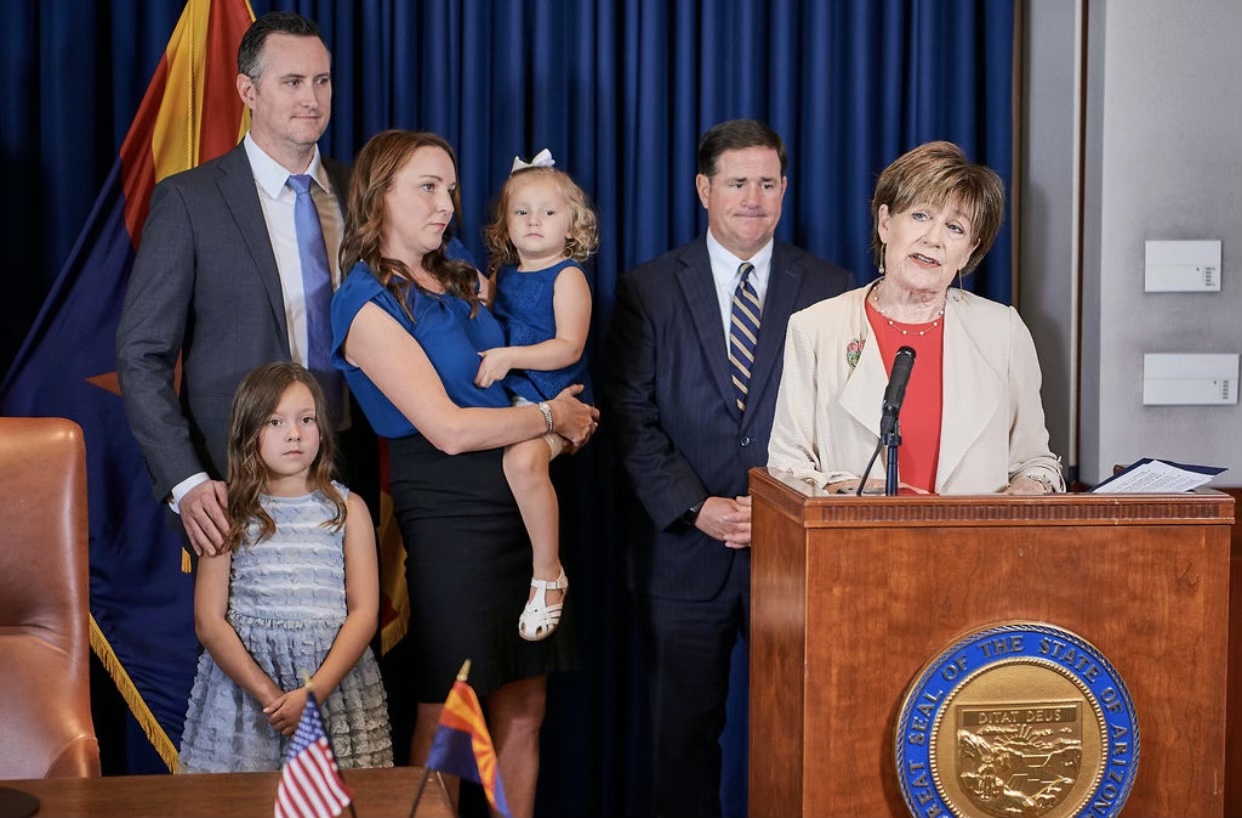 Take the story of the Riley family, courtesy of the Goldwater Institute (who I was privileged to work with on the original Right to Try, and now 2.0!).

The Riley family in Arizona exemplifies why the Right to Try for Individualized Treatments is so desperately needed. Two of their three young daughters were diagnosed with the rare and fatal genetic brain disease Metachromatic Leukodystrophy (MLD). Because Olivia was already showing symptoms, there was little they could do. However, there was a treatment that could help their youngest—but it was only available in Milan, Italy, due to FDA restrictions. The Rileys had no choice but to raise hundreds of thousands of dollars and move overseas to access the treatment and save their daughter’s life.

Kendra Riley, along with patient advocates and the Goldwater Institute, testified before the Arizona legislature about why the Right to Try for Individualized Treatments is so desperately needed. “It brings tears to my eyes thinking of all the other special needs families out there who have always held on to hope for a chance like this. A chance at healing. A chance at a normal life—something every single one of us deserves,” Kendra said.

We were touched to be joined by the Riley family for this signing. Watch the bill signing and my full speech here.

I will note that my opponent, Christine Marsh, was one of a handful of extremist Democrats who voted against the Right to Try.