Myths, confusion and the truth

As Arizona settles into the post-Roe legal landscape, I feel it is important to clear up some deliberate and regular untruths shared by the pro-abortion side designed to confuse a clear legal picture.

So here is a quick guide to common pro-abortion arguments about the post-Roe landscape and the truthful response!

“A person who provides, supplies or administers to a pregnant woman, or procures such woman to take any medicine, drugs or substance, or uses or employs any instrument or other means whatever, with intent thereby to procure the miscarriage of such woman, unless it is necessary to save her life, shall be punished by imprisonment in the state prison for not less than two years nor more than five years.”(Miscarriage clearly means abortion)

While Life is protected for now in Arizona, the battle to protect Life is truly just beginning.  Your life, my life – every life – is protected by our Constitution– and should be protected in law.

A first defeat to celebrate: After much hype, the extreme pro-abortion initiative that went way beyond Roe to enshrine abortion-until-birth in the Arizona Constitution – literally gutting every pro-life protection for women in place in Arizona – failed.  They didn’t gather enough signatures to appear on the 2022 ballot. But organizers have promised they’ll be back for 2024. Until we get badly needed initiative reforms passed, decline to sign any petitions!

Speaking of ballot measures… Curious about the referrals and initiatives on the ballot for this November? There’s a lot to oppose. The Conservative AMAC (Association of Mature American Citizens) is inviting Arizona voters to a webinar hosted by Arizona Free Enterprise Club (“What’s on the Ballot? The GOOD, the BAD and the UGLY”) to break it all down. Join them virtually this Monday July 18 at 6:00 PM at this link.

A potential election integrity mess brewing… You may have heard the news out of Pinal County. Over 63,000 incomplete ballots were mailed to voters in that area, likely stemming from address coding issues. Finger pointing has already begun. Pinal County’s plan to send additional ballots to fix the problem will almost certainly create new problems. And we can’t rule out glitches outside of Pinal County. The message: be vigilant, carefully read your ballot, and report any issues to your county, or the AG’s election complaint page (or send me an email directly so I can help get your concern to the right place!). The road to secure our elections against fraud – and sometimes plain incompetence – still stretches ahead. But don’t be deterred from voting.

Cast your vote and speak up and let us take action when the government makes errors.

Know the candidate’s records! If you remember my 2020 race against then-Senator Heather Carter, you remember the important role comparing records played in that campaign and my eventual win. We must get past the shiny packaging and study what a candidate has done in the past! You may see the name Matt Gress on your ballot. He’s running against my teammates Maria Syms and Vera Gebran. While Matt claims to be a conservative, his past actions show that he’s anything but. Educate yourself and your friends and neighbors. You can review all the facts at UnmaskingMatt.com. Also check out the great conservative endorsements the LD4 Strong Team has received and compare answers to key policy questions with the AZ Voter Guide.

Early morning “Walks for the Win”! Only 2 weeks left to help me and my LD4 Strong Team knock doors in the district. Join us Saturday July 23rd and Saturday July 30th at 8:30 AM! We’ll meet both days at Desert Trails Elementary School. Details below: 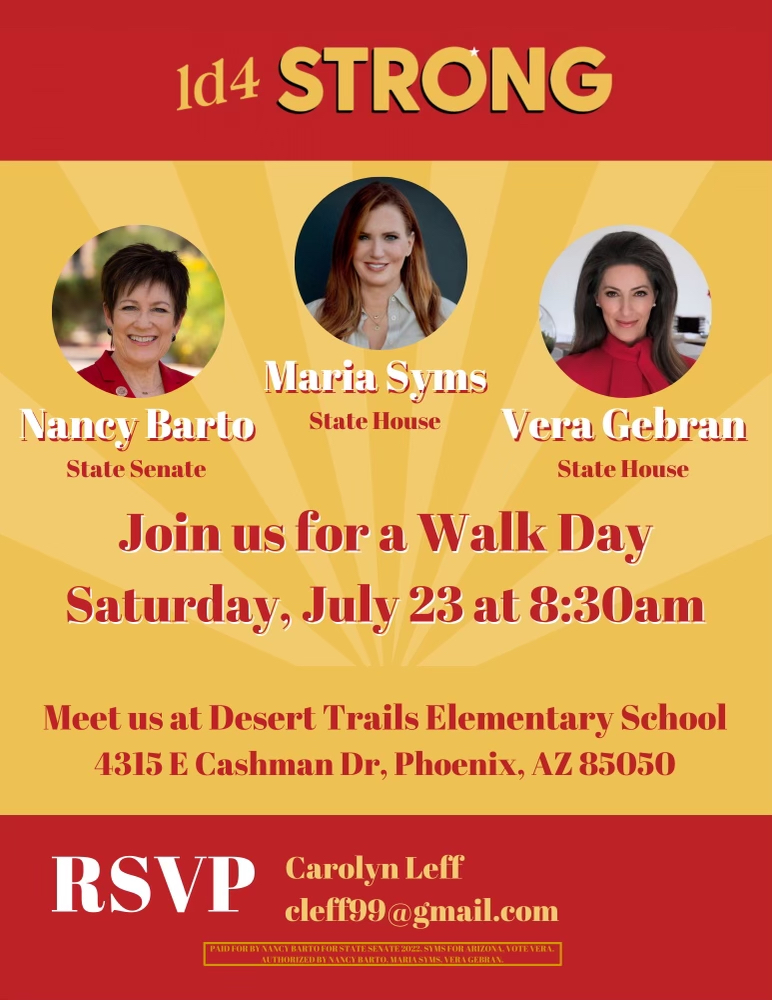 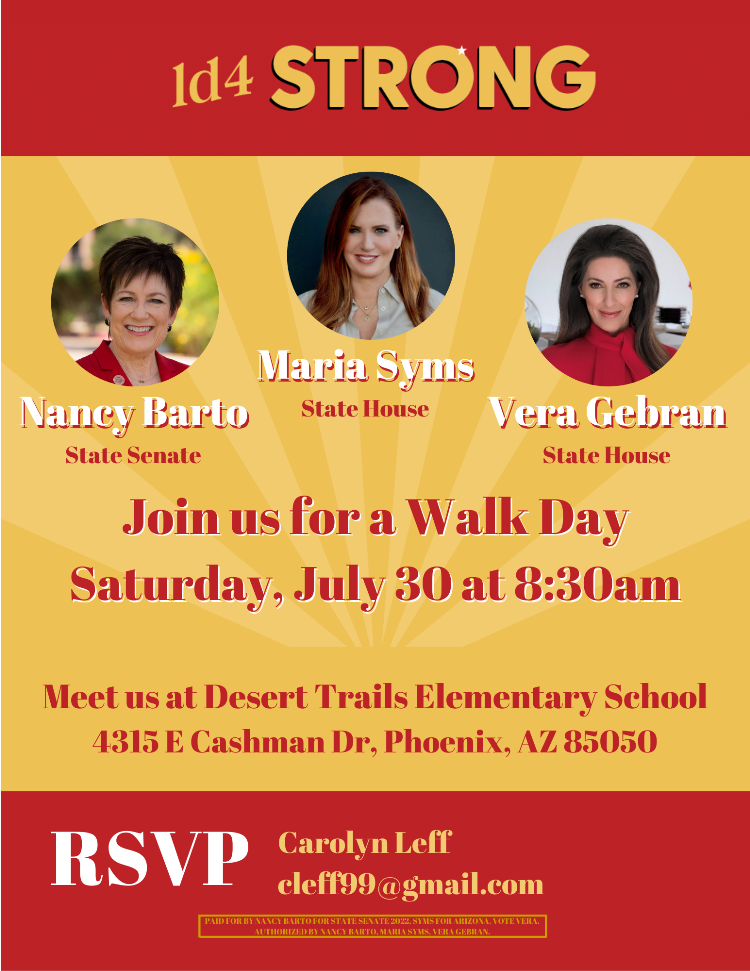